This Summer I went to Ukraine to partner with Hope for Orphans, serving alongside Ukrainian believers who put on a summer camp program for orphans there.

Before I went, I learned a lot about Ukrainian culture, including watching the documentary: Winter on Fire: Ukraine’s Fight for Freedom about the Euromaidan Revolution that took place there between citizens and the government police force in 2014. Many narratives exist about this event, but as raw footage shows from during the event, to label this conflict a civil war is misleading. The protesting citizens of Ukraine never took up arms against their own countrymen, as they marched and occupied, even as they received tear gas, brutal beatings, rubber, and finally real bullets as the only answer to their demonstrations. I was deeply grieved by what I saw, grieved to see men and women, some red cross workers running in to retrieve the wounded, shot dead.

This is the art piece I made in response to it, my cry to Christ to enter that suffering, and my belief that the lamb who was slain was present with the unjustly murdered as they lay dying:

While I was in Ukraine, I got to visit the memorial at the Euromaidan, and to weep there for those who were lost, and the cost of those events on that nation’s soul.

The day after I left the camp for orphans, the first morning I woke up without them within reach, I couldn’t journal at all. All I could do was draw them from memory:

Later I was ready for words again, and I wrote about my experience at the camp with one of the orphans, Bogdana, called My Wild One.

While I was there, I taught a master class on crocheting during free time several days where I got to connect to many of the younger orphans who weren’t in my group. On the last day I got to teach many of the older kids as well. All I taught them was chaining so that they could make bracelets and necklaces out of brightly colored yarn. One of my girls from my group, Oxana, started the trend of making multi-stranded bracelets. Our most popular colors were variations of yellow and blue, the colors of the Ukrainian flag.

In the month when I returned to the U.S., I stayed in CA and didn’t have any painting supplies at hand. But I began my own kinetic rosary, I began chaining and praying. With each stitch I chained for Ukraine- for the orphans I met there, for the saints I served with there, and for the American teammates I served with there. Having the physical motion to go with prayers that were sometimes no more words than a name, was a great comfort.

One of the hardest things about being home, was not being able to physically hold the orphans anymore, to hug them, or carry them, or stroke their heads. They are the living embodiment of trauma upon trauma, and not like children who have grown up in an environment with a secure and consistent caretaker. They are violent, and needy, they hold on too tight, and also abundantly charismatic, compellingly beautiful. I want so many things for them and there is so much darkness there, so that when I got back home to Dallas and at last began to paint in response to my experiences, this is what came out:

If you ask me what is going on in this piece, I really don’t know. Maybe that is the point. Maybe that is a lot of what real grieving is-not knowing nor understanding, but showing up and looking at what is there anyways. I know that some of what I saw and experienced in Ukraine traumatized me, and I will go and see a therapist about it. But I don’t regret going. To be traumatized for Christ, to serve and love others whose lives are a closed loop, and are living in survival mode, that is the least I can do for the least of these. It is not without cost, but it is a cost I am willing to pay and would again.

My prayer for the orphans I met is that God would hold them in His arms, would protect their souls in ways I cannot see, nor comprehend, because I cannot hold them as I want to now that I am home. That’s why this next painting I did is titled for what my fellow artist and roomate saw in it:

I realize now that for this post I haven’t said definitively how I am being spiritually formed during this processing. That is because I don’t know yet.

The last thing I have painted is my invitation to the Holy Spirit, to enter this space. One of my favorite descriptions of the Holy Spirit, instead of focusing on God’s gentleness, describes Him in the light of his terrible inevitability. In Flannery O’ Connor’s short story, The Enduring Chill, the Holy Spirit is personified or physically embodied in a young man’s room as a water stain on the ceiling that looks like “a fierce bird with the icicle in its beak” waiting to descend upon him. When the protagonist at last has his moment of surrender to God, it is no joyful thing:

“He saw that for the rest of his days, frail, racked, but enduring, he would live in the face of a purifying terror. A feeble cry, a last impossible protest escaped him. But the Holy Ghost emblazoned in ice instead of fire, continued, implacable, to descend.” 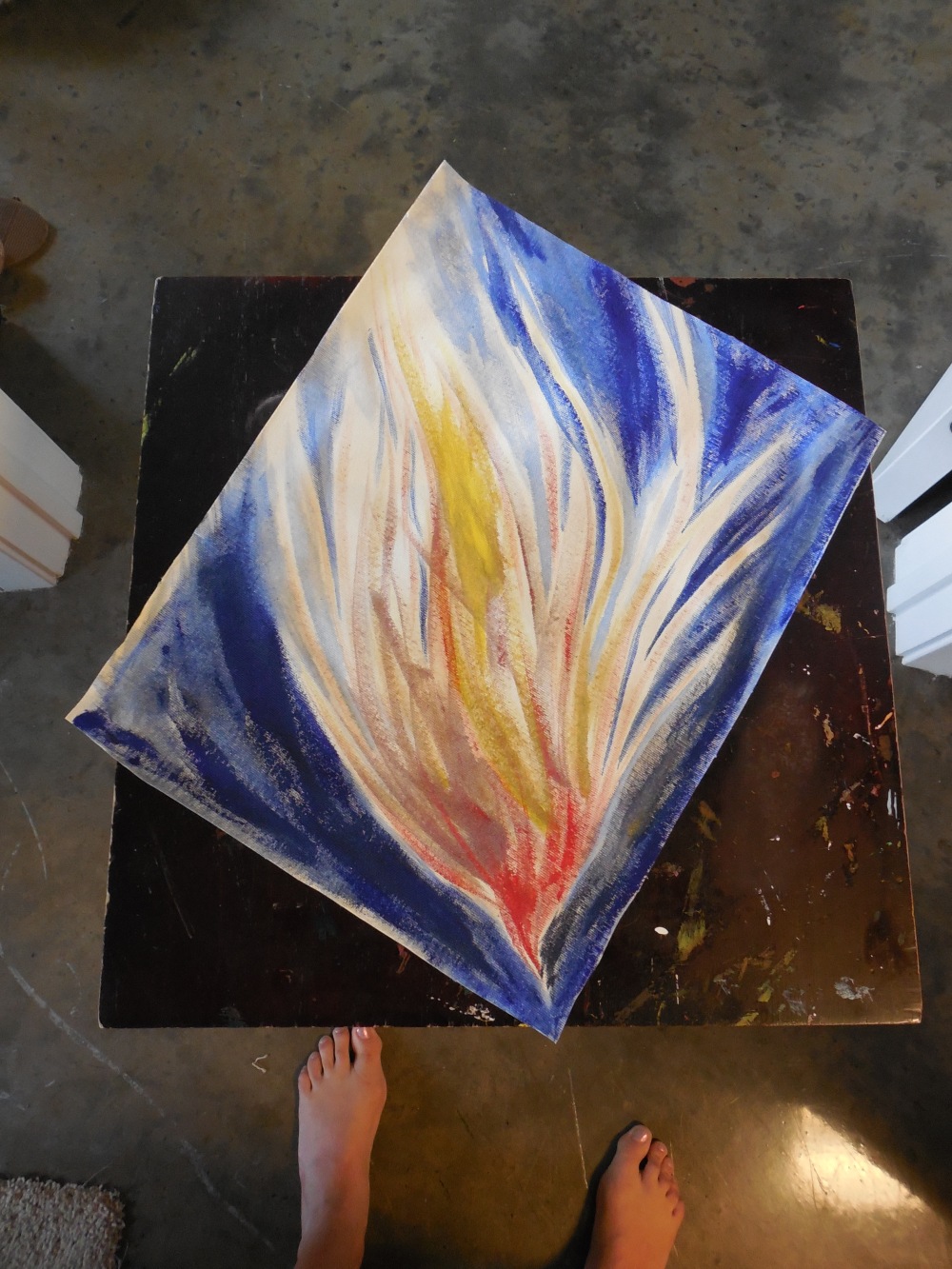 Since I am very raw, I draw some strength from the idea that my God is one who is powerful in ways I cannot understand, who can enter unflinching into horrors. He is no stranger to the moments and places where those children are damaged and abused.  When and where there is trauma, He enters in. I am longing for, even thankful for that implacable sovereignty of God. I am clinging to it like a violent child. And I have set this this visual prayer over my work space where I write and paint as a further invitation. That as I continue in grief, anger, and wonder, He will descend and work in my art and in me.